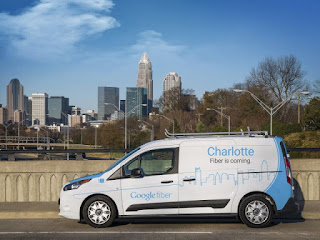 Remember a couple of years ago, when Google was deploying fiber cable in select US cities, and promised free internet access?

This offer is now history, and now the basic package is priced at $50/month.

Of course if you want TV channels and phone, these are still available as extras. Internet, TV and phone service via Google costs $120/month. Roughly the same price as every current service provider.

"Google Fiber is no longer offering free Internet service to any customer who wants it in Kansas City.

While Google Fiber is most famous for its $70-per-month gigabit plan, customers could also get slow Internet—5Mbps downloads and 1Mbps uploads—without paying a monthly service fee. The plan required only a $300 construction fee that could be paid up-front or in 12 monthly installments of $25 each.

But that plan is now gone in Kansas City, Re/code reported yesterday. The free offer was still online as recently as Wednesday, but the current offers now begin at $50 a month for symmetrical 100Mbps service.

The move coincides with Google expanding free Internet service for qualifying low-income customers. Instead of providing free Internet to anyone in Google's service area, the company will instead make targeted efforts to bring poor people online.

Kansas City (in both Kansas and Missouri) became the first Google Fiber metro area in 2012. Austin, Texas and Provo, Utah came next, and Google Fiber still offers the free 5Mbps Internet in those cities. There are no changes in Austin and Provo for now, Google told Ars today.

But the change in Kansas City may signal a long-term shift in pricing strategy. Newer Google Fiber cities such as Atlanta already had the $50-per-month plan as the entry-level package.

Google previously promised "up to seven years" of basic service in homes where the $300 construction fee was paid. Google told Ars that it will honor existing customers' agreements. Though the free offer is no longer listed on the website, Google also said that it is still available for new signups until May 19.

After that date, Google will continue offering free access for people in certain affordable housing developments, with no equipment or construction fees. It's not slow, either: Google's free Internet for low-income residents was recently upgraded to gigabit speeds. Google also promised to expand the free gigabit speed Internet to "select affordable housing" in all of its cities."