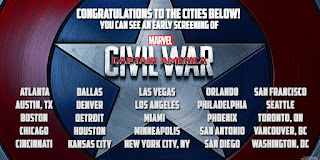 "Early screenings of Captain America: Civil War are likely hitting a city near you next week, as announced on twitter. The movie will screen in twenty-five cities across North America (US and Canada) on Thursday, April 14, a full three weeks before the film comes out in wide release.

This shows a remarkable amount of confidence in the movie on behalf of Marvel Studios. Letting this many fans see a film this early means they think if they see it now, for free, they'll pay to bring friends and family to it again when it hits theaters. The last comicbook film to do significant early fan screenings, Deadpool, turned out a huge hit at the box office, after all."