Netflix Admitted They Throttle Connection Speed For Some Users 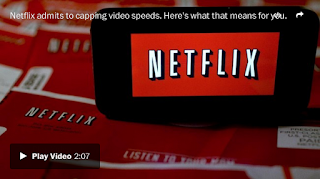 This shouldn't come as a surprise...

Streaming video over the internet is expensive, even Youtube struggle to make money with it, and the last thing Netflix want is to have viewers to flock away from their service after ending up with a dramatic overcharge from their internet service providers for busting their monthly plan.

So to fix that, some users end up with lower bitrate without their knowledge (therefore a significant quality decrease) than other users having a more capable data plan.


"Netflix has long presented itself as a champion of unfettered access to Internet content. But those claims are ringing a little hollow after the company admitted Thursday that it deliberately slows down its streams for customers watching on the cellular networks of AT&T and Verizon.

Normally, Netflix subscribers need at least a 500 Kbps connection just to open a streaming TV show or film. The service recommends a connection that's at least six times as fast for normal viewing at standard definition.

But for more than five years, Netflix has capped its video stream to just 600 Kbps for AT&T and Verizon's wireless customers, the company told the Wall Street Journal Thursday. The reason? Well, because video uses up a lot of data, Netflix subscribers risked blowing past their monthly caps without the throttling. Not only does going over your limit result in sometimes stiff penalties, but it also may discourage users from continuing to watch Netflix. The throttling therefore helps ensure that consumers on AT&T and Verizon don't overuse their data -- and that viewers' binge watching habits won't get cut short."