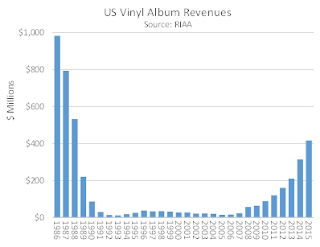 The 2015 music industry numbers are out at the RIAA (Recording Industry Association of America), and for the second year in a row, vinyl sales outperformed the revenues of streaming, subscription and ad-supported apps like Spotify and Youtube. In fact, vinyl records sales are almost on par with the numbers of 1988.

Vinyl records are still a niche market, but to the music industry, it is a significant source of revenues. Thousand of vinyl album sales generate more than the billions of streams served in the digital world.

That says a lot... Even though streaming is extremely popular for the audience, the music industry, studios and artists don't really get anything out of it, at least directly.

Seems I am not the only one who previews an album on iTune, and then go buy the vinyl record at the local music store instead of downloading it.