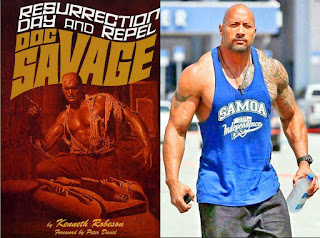 Black signed on in 2013 to co-write and direct a Sony Pictures adaptation, which he says “it's a personal film to me,” but since then there hasn’t been much done on the project.

“‘Doc Savage’ is sort of in the ether now,” Black tells Thrillist. “We’re hoping to make it sometime next year. I would very much like to do ‘Doc’ with a fellow named Dwayne Johnson if we can make that work. I made a decision that Dwayne is the guy. It’s on the back burner while he’s busy.”

In 2013, Black described the kind of actor he envisioned for his Man of Bronze: “They kind of gotta be tall. He’s the perfect physical specimen and when people look at him, they’re overawed by the sort of symmetry and perfection he exudes. You need someone magnetic and someone a little bit off because that’s the fun of the character. He’s been secluded from people and kept from any social niceties for so long that he’s become a savant.”

Let's see what will come out of this...!