Columbia House back in business? I sign up right away!

"Against all odds, it seems that Columbia House is coming back. The once popular mail-order music club had downsized operations in recent years: it shut down its music division in 2009 (but still offered DVDs), closed in Canada in 2010, and finally declared bankruptcy this past August. Columbia House was sold, and now it seems that the new owner is planning to reopen the company, this time as a vinyl service.

John Lippman was an exec at defunct global financial services firm Lehman Brothers Holdings Inc., and he bought Columbia House for around $1.5 million this year. According to him, there aren't enough online retailers cashing in on the explosion of vinyl sales. He told the Wall Street Journal, "For a category that is meaningful and growing rapidly, you don't see a whole lot of choice." 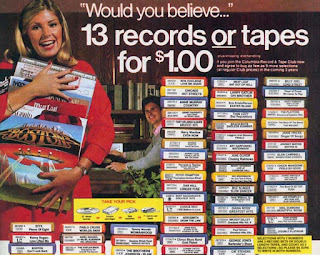 It's not exactly clear what Columbia House's new business model is going to look like. Previously, the service was known for wooing customers with offers of a dozen CDs for a penny (or some such deal), and then fleecing those same customers with marked-up prices and negative option billing. It seems that the new service might resemble a record-of-the-month club, with subscribers getting some degree of choice regarding which records they receive. It's possible that there will be a slightly more conservative version of the company's former promotional packages (so don't expect a stack of records for a penny).

This won't be the only vinyl delivery service on the market, as VNYL and Vinyl Me, Please offer similar mail-order models. Feedbands also offers independent, unsigned bands vinyl mail-order.

Given that vinyl is still a relatively niche branch of the industry, it's unlikely that this new plan will return Columbia House to its former prominence. Still, for those with fond nostalgic memories of receiving piles of CDs or tapes in the mail in decades past, this might win over a few customers."