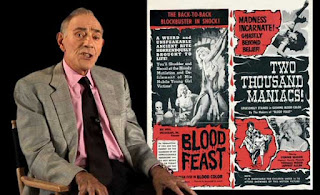 R.I.P. HG Lewis.
You will be greatly missed.

Thank you for everything!

"It’s with a heavy heart that we report the death of Herschell Gordon Lewis, the “Godfather of Gore”, who passed away at the age of 87. No reason for his passing has yet been released but we’ll update as more information comes in. The announcement was broken by Something Weird Video.

Lewis is the man responsible for such films as Blood Feast, Two Thousand Maniacs!, A Taste of Blood, The Gruesome Twosome, Scum of the Earth!, and She-Devils on Wheels, which is only a few of the titles he worked on. Lewis took an extended hiatus from directing after 1972’s The Gore Gore Girls only to return for 2002’s Blood Feast 2: All U Can Eat, the sequel to the 1963 film that is widely considered to be the first splatter film.

Herschell Gordon Lewis was one of Bloody-Disgusting’s first interviews, conducted in 2002. You can read it here.

We send our deepest condolences to the family and friends of Lewis. We also want to send our deepest gratitude to a director whose films were the foundation and inspiration for countless filmmakers since.